6 Reasons Why Now is the Time for Video 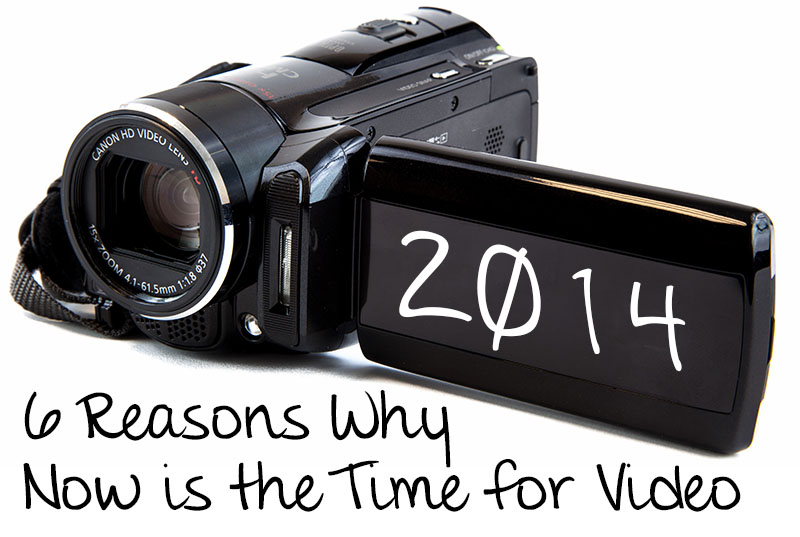 It seems like 2013 was the year that video really rocketed to the fore as the marketing and communication tool for companies big and small. We all realize that video is the way to communicate your story but why the sudden up-tick in interest in video marketing?

It didn’t used to be viable to host or watch videos on the internet because of bandwidth limitations. High speed access to the inter-tubes, at home, at work and on the move, is now seen as a right in the 1st world, rather than a privilege. We see this in the film world as video on demand becomes the default way to consume video, and physical disks become old-school. The reality has finally caught up with the promise (almost) of being able to steam and watch what you want anytime you want, anywhere you want (unless you’re trying to stream Netflix on a Friday night of course).

This fast bandwidth is just as beneficial for marketing and corporate video as it is to entertainment providers, and it’s only going to get better, and faster. Streaming a video is no longer a chore with low-fi results. We expect HD video and great audio from YouTube (they’re already talking about 4k) and even uploading video is no longer something you start before you go to bed, and pray it has uploaded successfully by the time you get up in the morning. For viewers and creators, fast, stable internet connections everywhere make video as the preferred communication medium, totally viable.

When I said ‘everywhere‘, I mean ‘everywhere‘. Smart phones and tablets with fast connections make video on the go simple. I went to change brake-bulb in my wife’s car the other day. When I got out to the car it wasn’t as obvious a task as I’d thought. But I pulled out my iPhone, and fired up YouTube app, and queried on “VW new beetle brake light replacement” and in an instant I had several decent videos available to walk me through the process. As someone who grew-up with black and white televisions this is sci-fi. Seriously, even a couple of years was this as simple as it is now, and was there as much content to mine as there is now? Accessing video on my phone is a daily occurrence and I’m an old fart so, to the digital natives, this is all totally mundane. And the rest of the population is not far behind. Video is not something just to access at your desktop or TV – video is, literally, everywhere in large part thanks to smart-phones.

3. No One Wants to Read Anything, Anymore:

Given the choice between reading a page of text about how to change a car brake light, and watching a short video on how to do it, of course, I’m going to watch the video. What about you?

You and everyone else.

The video gets the job done so much more effectively and efficiently.

4. Easy to Create & Everyone Wants to a Creative:

It used to be difficult to create a video but that was before iMovie and everyone having a HD movie studio in their pocket. Now everyone wants to be a creative and video gives them that opportunity. Even if someone has never created a video before, it only takes a little push to get them up and running. At work, everyone knows that they should be communicating through video. As soon as you offer help to get them started, or ask them to be a stakeholder in a video project, everyone gets enthusiastic, has an opinion, and their inner-producer comes out to play. People have so many dull tasks to complete; being involved in a video project, even in a small way, allows you to be creative and play and just have fun. Who doesn’t want to have fun?

Social allows you to target your specific audience. Instead of the blunderbuss approach of old when you put an ad on cable TV and hoped it was applicable to a tiny percentage of those who saw it., now, you can target a very specific audience. They will find, and see, and promote your content. It doesn’t matter how many thousand people see your video on TV; what matters is that your video gets seen by the people really interested in it. Using social in a smart way allows this to happen.

Back in the day, only a small percentage of companies could afford TV advertising campaigns – you can now create and host a video for virtually nothing so there’s no reason not to try. The quality of your content doesn’t need to match a Super Bowl ad; in fact you can get started with the iPhone you already own and a free YouTube account. Even if you aspire to higher production values, the barrier to entry has never been lower. There is no excuse for not producing your own videos, if you have any desire to get involved.