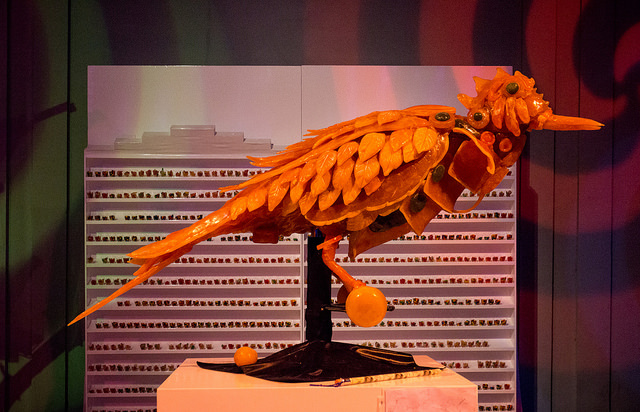 I get sent to a few conferences each year. Most of them I working so Adobe MAX is the conference I actually look forward to attending and I get the most out of. For me, in my second year of attending, it’s the perfect mix of the geeky and the artistic.

It’s flattering to be labeled a creative after years of being a hard-core geek, although, I do feel a little bit of a fraud when some speaker looks out into the crowd of six thousand and calls us all “kick-ass creatives”. It does make me want to go away and make sure that my portfolio is up to date, and is the best it can be, so that I feel more like I truly belong in this tribe. This is one of the many reasons that I love Adobe MAX: I go away inspired to create and fight for another year. I may have spent the last two months tweaking a hundred boring screencasts but I leave MAX determined to push harder and find those projects that will make feel like I earned the moniker, “kick-ass creative”.

It is easy to forget that you are Adobe’s paying guest when you’re all fired up to change the world, which probably means that they’re doing a lot right. Creative Cloud has become the defacto standard for a huge majority of creatives. Unless something changes, I can’t imagine not having to pay Adobe every month for the rest of my life – I can’t do anything professionally, or on any of my passion projects, without my CC subscription. Adobe have me, and many others, just where they want us. And yet, I don’t feel any resentment for paying my CC membership as Adobe pushes to develop new tools and expand existing ones, especially when you get to meet Adobe’s agents and they are all so approachable and enthusiastic.

On the second evening MAX hosts ‘sneaks’ they wheel out various developer groups to show us the tech that they’ve been working on that they’re excited about. These projects span the gamut of features and vary from the fully baked and ready to try, to sketchy prototypes – they are presented by slick marketing people down to interns and hardcore developers but they all are enthuzed to show the appreciative audience what they’ve been working on. My company seems to shelter our developers from our customers (or maybe the other way around) and we hardly show anyone anything without displaying a Safe Harbor slide first. Adobe don’t promise delivery dates but they let their developers hear the real applause or what they’re working on. Yes I want PS in the browser; I’m desperate for that amazing demo of cutting the hesitations out of video interviews and seamlessly stitching the video back together without jump cuts. I remain to be convinced about that new way of visualizing audio waveforms and being able to totally change the perceived time of day in any photograph makes the purist in me shudder in my shoes, but I appreciate how transparent Adobe is trying to be.

But I’m getting ahead of myself. I’m already talking about sneaks and I haven’t talked about the amazing first day keynote when the CEO of microsoft himself came on stage, showed us things on the new Surface Pro 3 that had even the most diehard Apple fanboy questioning his allegiance, and then told us we were all going home with a new $1300 device! The room went crazy, like a very nerdy edition of Oprah’s Favorite Things. “You get a Surface. And you get a Surface. We’re all getting Surfaces!” But I’ll save my opinions on this new hybrid device for another day (a quick sneak of my own – I surprisingly like it this far).

The keynotes are amazingly choreographed. The visuals and audio projected on the stage pumped my adrenaline better than any recent action movie. I don’t know how big that subwoofer is but it must make the lights in the surrounding LA neighborhoods dim to be able to shake that whole building. You leave the room plotting who you’d have to kill to get your own work up there and wondering if it would hold up.

But the main stage is just part of the MAX experience. The break out sessions continue the theme of technical and inspirational in different sessions and, at their best, in a single session. Some of the people presenting are rockstars in this field. Just when I think that I’ve got a handle on audio editing I attend one of Jason Levine’s sessions and realize that I know diddly squat. I went to another session billed as “How to Tap into Your Creative Voice and Make Work that Matters” by designer James Victore and it did live up to the high expectations it set – I have to just persuade my boss to let me create work exactly how I envision it …. that might not fly. At my final session of the conference, Storytelling Techniques from an Independent Filmmaker, I was half plotting my escape route to the airport, and half pay attention when I realized that that voice was strangely familiar. It was Maxim Jago who I had listened to through hours of video training for Premiere and other programs. I can largely attribute any Adobe Premiere chops I have to Maxim’s tuition so it was a little weird to see him at a podium talking in less technical and more zen terms about making movies.

You do have to be a little careful in choosing sessions that will be relevant and useful to you. The label ‘creative’ covers a lot of ground and many of the popular sessions fill up so it is well worth doing some homework and scheduling before you turn up on site. Many of the sessions will be available on line in coming days so what do you get out of putting up the money and attending in person? Putting the Surface Pro 3 aside, watching the sessions from home in your own time is still valuable but the inspiration you I get from being there in person carries me through another year and reminds me to always strive to be better no matter how small or insignificant the job.

It’s a full year until the next MAX but I’m already assembling my arguments for my boss to send me next year. If you’re in the field and have never been to Adobe MAX I’d highly recommend that you do the same too and, hopefully, I’ll see you there.

One thought on “A Personal Review of Adobe MAX 2014”