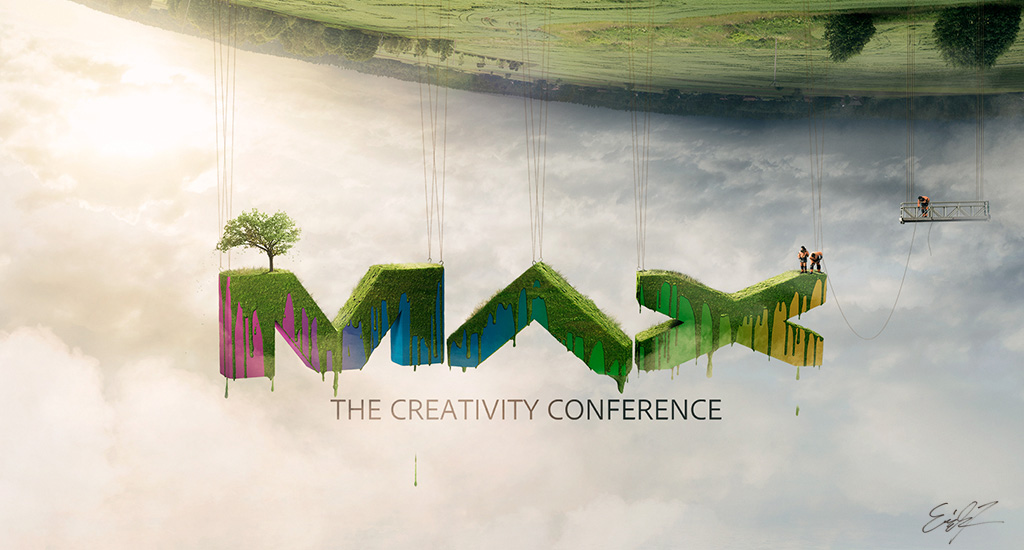 The type of conferences I usually get sent to for work can be more of a chore than anything else, not least because I’m usually working and not an attendee.  So it was much anticipation that I attended Adobe MAX this week (6-8 May, 2013) at the Los Angeles Convention Center. Billing itself as the “Creativity Conference”, I, along with 5,000 other designers, developers, video, film and industry leaders, went along hoping for plenty of inspiration and I was not disappointed.

The first keynote was the more corporate of the two keynotes, giving Adobe a platform to showcase their new products and announce their direction for the coming year. As a newbie to this conference I was told that there had been a focus on developers at MAX in the past but this year the focus seemed much more on creatives. Few of the announcements seemed to be geared towards developer’s tools or code with a majority of the time devoted to the Creative Cloud.

First let’s address the biggest announcement: the creative suite tools will no longer be available  outside of a subscription model (Creative Suite will be Creative Cloud by June). As someone who uses many tools in the suite this is something of a saving for me in the long run but I know a lot of old school photogs who only use PhotoShop who won’t be as enthusiastic about this change. It will take them a huge mind-shift to get used to paying for their tools on a monthly basis rather as an outright purchase.Will this be true of all the tools? Will you still be able to buy a standalone copy of Lightroom? I do hope so but this level of detail was not addressed.

As the whole world moves to a cloud model it’s good to see Adobe taking a lead. Of course, Adobe’s cloud is not the cloud I’m used to: Photoshop is not going to be running on some remote server that I log into so it is something of a misnomer to call it a cloud subscription. You are able to download any tools you want or need for your monthly subscription but they will call home as you use them to make sure you’re up to date on your dues. From Adobe’s perspective this makes great business sense as they’ll have a much more predictable revenue stream. As a user I think many will be happy with this move but I’m sure we’ll be hearing from the desenters soon.

After demoing some cool new features (I’m especially excited to see an Adobe equivalent of Plural Eyes coming in Premiere CC and de-blur in Photoshop ), Adobe just had time to show their first move into hardware. The two products they showed were a  Bluetooth, touch-sensitive pen and ruler that will work on any tablet and carry your cloud settings and preferences with them. I’m pretty excited about having touch-sensitivity for sketching and retouching on my iPad and like many others in that hall I was hoping for an Oprah-like-moment as David Wadhwani told us to look under our seats for our very own Adobe pen but, alas, this is still a prototype and there was no indication when these tools/toys would actually be in production.

This can only be the tip of the iceberg for Adobe and hardware development. How long will it be before we see Adobe selling or leasing their own, sanctioned work stations? I for one would love to be able to buy a video editing station that Adobe guaranteed would fly instead of poring through their minimum recommended specs and Googling to see what specific components work for others. If I was Wacom I might be a little worried right now.

The day two keynote was much more about creativity as a concept than any specific product. It focused around four creatives, each leaders in their field.  Paula Scher represented the graphic arts, Phil Hansen had a more fine art perspective, Erik Johansson showed how much some art photographers are now dependent upon Photoshop, and Rob Legato represented the film world as an Oscar-winning visual effects supervisor. Each approached their time on stage in a different way but all were entertaining and inspiring.

The tail end of this presentation was Adobe’s plug for Behance. Behance seems to be Adobe’s social part to this puzzle – you can hardly mention the cloud without mentioning ‘social‘ and ‘mobile‘ in the same sentence can you? I’ll comment more on Behance once I’ve played with it; for now let’s just say, I remain to be convinced.

The other session everyone was invited to attend together was the Sneaks on Tuesday night. This seemed to be THE event for everyone to nerd out. Guest co-hosted by Rainn Wilson and and special guest Mary Lynn Rajskub with Ben Forta, director of Evangelism, attempting, and often times failing, to keep the stars under control. I felt sorry for some of the engineers out on stage dealing with both a big crowd, a strict five minute time constraint (enforced by Erik Estrada replete in his old CHiPs uniform) and a heckling Rainn Wilson. Yet some future possibilities still shone through. Most amazing to my mind (and ear) was an audio tool that could reverse engineer music into separate tracks – granted, it was only separating guitar from audio in the demo but can you imagine what this tool will do for the remixing crowd if it ever gets out into the wild? Also a tool for photographers that could change the lighting after-the-fact: very cool looking but I do dread to think what certain members of my photo-club will do with this tool if it ever makes in into Photoshop for real.

So what else was going on at MAX except the well reported keynotes and the amazing Tuesday night party headlined by the Black Keys? Much of my time outside these central, core events was spent in sessions and labs, most of which were excellent (I now find myself a bit of a fan-boy for Jason Levine and Jilieanne Kost) with only one real disappointment in my whole schedule.

I came away from MAX feeling inspired and with a head full of new possibilities and tricks I’m dying to try out. I just hope I can persuade my boss that I need to be sent again next year. Much of the year is spent on my own, as the only person in a large team directly focused on video, stills and editing. It’s good for the soul to be able to learn new things and be surrounded by people who understand what you do and the issues you face, and still others who inspire you to be better.

One thought on “Adobe MAX 2013: A Newbie’s Perspective”