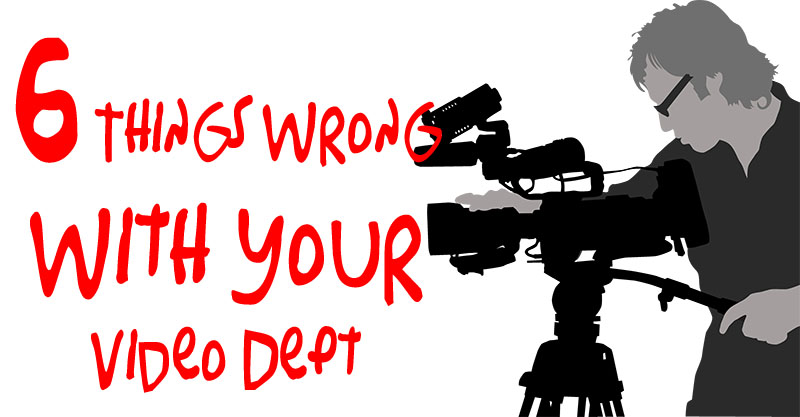 If you work for a medium-to-large sized company it’s likely that your marketing department owns some sort of video production group. These groups can range from one person (usually called Gary), who deals with agencies for the actual production, to a large department, with a fully stocked studio and gear inventory, capable of producing all kinds of video in-house, and out in the field. It makes sense for many companies to have these resources in-house and on-hand, however, being outside these departments, but dealing with them regularly, I’ve found there are few things most of these in-house groups get wrong.

It’s not their fault. Most of these groups are manned by well intentioned, talented staff (we love you Gary), but the way they have been set up, and who they answer to within a company, cripples their effectiveness and their creativity. Here’s the top six things  wrong with your in-house video production department:

The first question you encounter when you approach your video group about a potential, or immediate project is about where the money is coming from. This is as a result of where they fit into the organization. They’re setup like a business within a business and they have to be profitable. They may have some budget of their own but they’re not about to give it to you. Maybe you’re a smaller product development team within your organization and your VP has just told you that you should get a video made to show the top 10 cool features in your new release. You don’t have budget for marketing because that’s centralized too but you go and talk to Gary about getting this made. He tells you it’s an easy project that the central video production team can handle and that it will cost your team $4-6K. That may, or may not, be a reasonable cost  but it doesn’t matter because your budget for this is zero dollars.

Often this is the start or guerrilla filmmaking in the workplace. You have no budget for marketing but your VP wants to see a video produced: how hard can it be? Maybe the first 10 videos you produce within your own team are crappy but you slowly figure it out. You get more ambitious and create more complex videos on the side. Those more ambitious videos are really the domain of your central video production group but they taught you from your first encounter with them, that they are not interested in your project unless you have budget.

Your video production group never start a project until a high level executive has asked for it, or a group comes to them with budget. It’s back to that money thing. They don’t go out looking for new projects; they wait for projects to come to them. They don’t really look at how video might be used better within your organization; they wait to be asked to make something specific. Perhaps your company could close more deals if video was used later in the sales funnel. Your central video group won’t look into that until you ask them to and you have budget to do so.

Your central video group is not rewarded for taking risks so, if you somehow get budget, they will deliver something professional but boring. This is not their fault. They are used to dealing with executives who don’t know much about media production; who think the Apple iPad launch videos from 4 years ago still are state-of-the-art; executives who have sign-off on projects and budget. It’s easier to produce what these executives ask for than to try to educate them about what might be more forward-thinking – it can also be hazardous to your career. The video production group have learned what executives like and that’s what they produce. They have lost sight of the fact that the executives who have budget are not really their target audience.

4 – Video is not the Product

The central video group behave like video is your company’s main product. Unless you’re NBC, this probably not true. Everyone in your company should understand your business; this is especially true if they’re associated with marketing which your central video group almost certainly is. So many times I come across people in a company’s video production group who can’t explain to me their company’s latest product, service or the latest innovations in their field. Their argument always is that they have to know about digital media production, and that their company’s range of offerings is so huge that they can’t possibly be expected to know the market. In the next breath they try to explain why their producer should be asking the questions , and their editor should be left alone to cut the footage. I don’t know about your market, but in the high tech field things change really fast. In a simple example, a product’s name might have recently changed and the customer we’re interviewing is not aware that the terminology they are using is out of date. If the producer doesn’t catch it we will produce, at best, and already dated video and, at worst, footage we can’t use at all.

Video is probably not the product that makes your company money. If the people producing your videos don’t get that and they don’t understand the nuances of your market, how are they any better than an outside agency?

There are too many people involved in the process which makes them slow to react. In some pre-production calls I’ve been involved in there are sometimes ten people, only two of which actually make something; the rest being a collection of managers, stakeholders and process cops. A big part of that meeting is people fighting for turf leaving the two people who actually have to make the video the meeting is about, totally confused about what is required and who they are answerable to.

In the production phase the central video production team believe that the one-man-crew can’t produce professional work, so they turn up to a shoot with too many people and too much equipment. This can intimidate inexperienced talent (and your talent often is) and is disruptive at a location resulting in you not being asked back. It also explains why they cost so much and move so slowly. There is a time and a place for a medium sized crew and a video testimonial usually isn’t it.

If I can talk to the central stakeholder, I can produce something quickly and efficiently, with fewer iterations and back and forth than a ‘professional’ crew.

They’ve forgotten that video is supposed to be fun. You can tell if someone was having fun when they made something creative or if they thought it was a drudge. When a development team is trying to produce video it is often a time of celebration: the product is complete and coming to market and they want to tell their users all about it. When that team goes to the central video production group the fun is sucked right out of the room. First they get hit with the budget question, then a load of technical hurdles are thrown in their way and they are treated with the respect of a group of newbies. I have fun when I create a video. Even when it’s ‘just another screencast video’, I have fun using my craft and showing the stakeholders how good and professional I can make their product look and I hope it shows in the videos I produce.

Until your organization can address these 6 issues with video production you will continue to produce the videos your organization deserves. If you’re happy with the status quo, you’re in luck. If, however, you want your videos to be truly creative and out of the box you have some work to do.