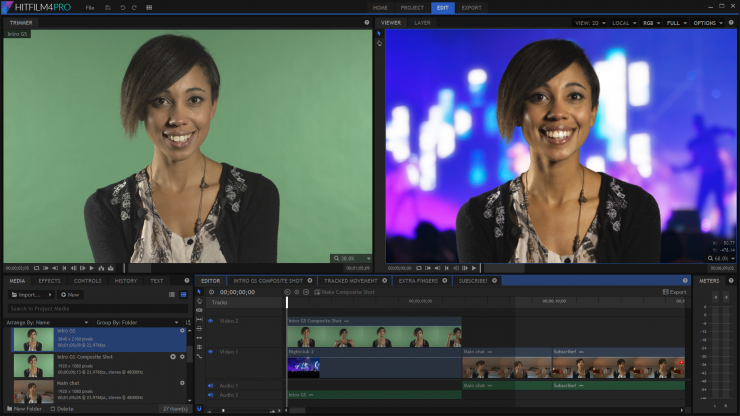 Like a lot of people these days, I have drunk the Adobe CC kool-aid. I love the way Premiere, just works. As far as workflow, the dynamic link library is a godsend: the way you can embed After Effects clips, and jump out to Audition, Speedgrade and Prelude just makes my professional life that much simpler and well worth the price of admission. I do understand that $60 a month is a bit rich for some and there are now some great options if you don’t want to spend a dime/penny.

When I was starting out your choices were pretty limited (I struggled with Microsoft Movie Maker for more time than I care to remember) but now there are some great, fully-featured options. Some are free versions (cut down versions) of NLEs you can buy (the freemium model); some are standard freeware offerings. All of the following will get you up and editing your footage for no money. These are my top 5 recommendations:

This is the program that has changed the landscape in the last year or so. Even without buying any of the ‘booster packs’ HitFilm Express does not feel cut down or crippled in anyway. It supports compositing too – what does that mean? It means you can do a lot of special effects work inside HitFilm itself: it is like having After Effects built into Premiere. It also supports color grading and motion effects so, basically your whole workflow is covered. The booster packs are reasonably priced and sometimes go on sale and will add to your creative possibilities but are in no way essential. If I were starting out, HitFilm Express is where I’d begin – it is very user friendly and there’s a decent support community of other users to help you out when you get stuck.

Before the release of HitFilm Express, Lightworks used to be the leader in this niche and my number 1 recommendation. It is a fully featured NLE, and the paid version has been used to edit some Hollywood blockbusters so it is worth learning. However, it is more difficult to learn than HitFilm and it feels more crippled – for example, you can only render out at 720 until you pay more and that’s a deal breaker for me.

There are 3 versions of Black Magic’s Resolve: the basic version is free, Studio is around $1000 and the most advanced version is $30,000! Obviously, they want to get you hooked and then build up from there but the basic version has 75% of the features of the $30k version. Black Magic make cameras and Resolve seems to have been created to support those cameras so it is very strong at 4k editing and color grading. It isn’t quite as fully featured as Hit Film Express but it is great for editing and color grading and it has decent audio tools. When it comes to even simple motion effects, like titles, is when you see the holes in its coverage but it is a tool a lot of camera people having been turning too. I even see some Premiere devotees putting Resolve into their workflow.

Blender is intended as an animation creation tool, however, it does have a decent NLE built in. If you are new to editing, Blender can be very intimidating, however, if you are looking to learn to be an animator more than a traditional live-action editor this is the tool you should learn. There’s a big support community out there to help you on your journey up that steep learning curve but you’re going to set to some serious study time aside to get proficient. I’ll be honest, Blender still scares me.

The full version of Avid is an industry standard – I think that’s what the editors of the show at HitRecord HQ use. The free version used to be a way of Avid getting students used to their product so that they would carry that habit over when they went pro’. Unfortunately, when Pinnacle bought Avid they dropped support for the free version. It’s still available and, if you think you’ll be moving into a professional environment where Avid is used, it is worth trying but, without support, it is slowly dying and becoming less relevant.