When Corporate Videos Go Bad: Everyone Wants to be a Rock Star (Part 2) 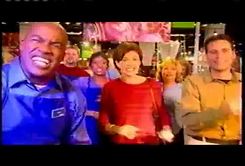 Let’s start by doing the time-warp back to the 80’s. It’s really not fair to pick on the 80’s out of context but, as it was the time I came of age, I’m going to allow myself one of two:

I’m pretty sure this wasn’t cool even in the 80’s.

Rap took off in the 80’s and white, corporate America tried to incorporate it into everything including boring training videos for their young, minimum-wage employees.

Pier One: And Make a Sale, Y’all

You’d think by the late 90’s/early 2000’s we’d have learned our lesson but no. Here Pier One goes making the same mistake, trying to rap their way through a training video. If anything, this one’s even worse as they don’t have the excuse that ‘it was the 80’s!‘

Let’s finish up with a classic of the genre; not a video as such this time, but a live performance. Unfortunately, the ‘original’ has become so widely mocked that BofA wisely took it down so the only version of it I can now find is Joe Rogan commenting on it.  The song and message are delivered competently but without a hint of irony or humor. You just end up feeling sorry for everyone involved. Which brings us to the takeaway: don’t fall into this trap. Just because it smells vaguely of rap or rock’n’roll doesn’t make it cool. In fact, the more dilute and beige you make it, the more pathetic it comes out looking. Let’s be careful out there…

One thought on “When Corporate Videos Go Bad: Everyone Wants to be a Rock Star (Part 2)”