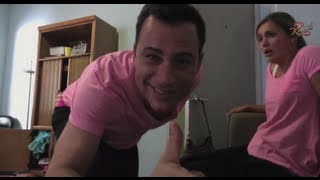 If you’re into Web Marketing, or just popular culture in general, and you’ve not been living under a rock, you must have seen the controversy Jimmy Kimmel caused with his manufactured Twerking accident video. Just in case you haven’t seen it, Jimmy Kimmel created a video of a woman, allegedly, trying to dance on amateur video. She falls onto candles on a glass coffee table and her workout pants catch fire. Or, at least, that’s what happens in part one that Kimmel’s team put out on YouTube and, without any of Kimmel’s promotion, it went viral. Viral enough that many TV ‘news’ and commentary programs reported on it and played it as if it were genuine.

Cut to part two, and the directors cut, where we see that Jimmy Kimmel fooled everyone. It is hilarious and everyone is saying that Jimmy Kimmel schooled the news agencies and the internet which is partly true. I have to say that I, myself, was schooled, because I didn’t think that you could manufacture this kind of viralility. I thought that most viral videos were accidents of popular culture – now I know better. But it is a pleasant lesson. I get huge giggles out of the fact that the news agencies look like idiots for broadcasting this as fact when they obviously didn’t do any research to verify it’s authenticity. I realize that a girl’s pants catching fire in a dancing accident is not as big a deal as a viral video of one faction bombing another, as evidence of war atrocities, or anything, but if these news programs aren’t sweating the small stuff, I doubt it is to pay more due diligence to the bigger stories.

But I don’t want to get carried away. Jimmy Kimmel’s prank doesn’t mean it’s the end of the world for news agencies, or even tell us anything about TV news that we didn’t already know: they’re desperate for a story, and viewers – they’re under staffed, they don’t care. They don’t do adequate research and they play a viral video that turns out to be fake to fill a few minutes of air time. Big deal! Kudos to Kimmel, but still, tell us something we don’t know.

Moving from a fun bit of fakery to a less good-natured (pun intended) piece of deception: Animal Planet released the follow up to their mermaid fake-out, The Body Found. If you dig deep enough you will find out that Animal Planet say that they intend these shows to be treated as works of fiction. What? What they have done is released a couple of pseudo-documentaries about evidence of the existence of mermaids. These programs include actors playing government officials and academic experts and ‘found footage’ courtesy of the SFX department. At no point do these shows say they are works of fiction – they’re played, not for laughs, but deadpan and they released onto a supposedly documentary TV channel in the obvious hope of going viral. In the follow up, the program makers are obviously proud of their deception which they measure in the number of dumb celebrity tweets they managed to garner as a result of the previous show.

Now you, and Animal Planet, may claim this is just a piece of harmless fun: that people stupid enough to believe this shit get what they deserve, but that is unfair. If you put programming on a documentary channel, the general public can be forgiven for expecting what they see there to be, in good faith, factual. This is especially true if you, at no point before, during, or after the show do you explain that everything you’re showing is made up. There is a section of the American population who are susceptible to conspiracy theories, and I do realize that they read the X-files as fact, but they shouldn’t be encouraged by audience-hungry, TV programmers. The government (National Oceanic And Atmospheric Administration) has had to take time to explain the experts of this show were not their employees but, in fact, actors. They have more important things to do than attempt to calm down a riled up public due to deceptive filmmaking (of course, due to the shutdown, they can’t do anything right now but that is by-the-by).

You might be right in saying that I’m over reacting, and that the viewing public, and the government, get what they deserve, but I argue, like Uncle Ben, that with great power comes great responsibility. Video is the most powerful, and persuasive, communication medium of our day. When Jimmy Kimmel fools us for a joke, and explains exactly what he has done, which makes that joke even more funny, that’s fair use in my book. When a TV channel sets out to deceive, just to improve their viewing figures, that’s cynical and deplorable.

At least, that’s my opinion and this is my blog, but I’m open to argument, so what do you think? Am I over reacting?