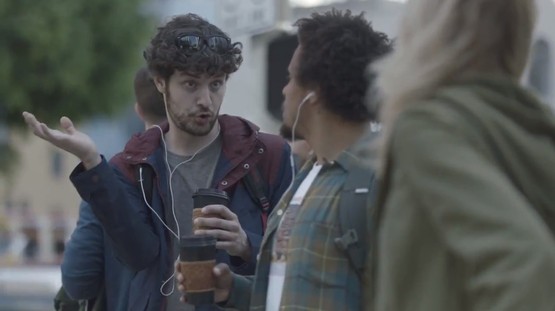 I’ve been noticing a trend in the marketing of some also-ran products, of attacking from behind. This seems to go against everything marketeers hold dear; never to admit that you’re number two (or worse). Yet we’re seeing some big names employing this strategy, including Microsoft, attacking the dominance of the iPad and Google search, and Samsung taking on the iPhone. In the American market, there is no denying the dominance of Apple phones and tablets and Google search. In fact, they have become synonymous with these markets. You don’t search for something, you Google it and the default smart phone choice is the iPhone. So what have you got lose by taking this position?

Let’s take a look at the examples:

I actually think Microsoft did a pretty good job here, especially, if you’re intimately familiar with the iPad ads they reference (and who isn’t?). I doubt it will make consumers want the Microsoft Surface more than the iPad but that’s down to the product not the video. And their argument is weak; there’s no PowerPoint but there’s Keynote, Haiku Deck and Google Presentations. The problem here is how far behind they are and how inferior their product is. Interestingly, they don’t seem to mention Surface anywhere, although we all know that’s what their Windows 8 Tablet is. Did they damage their tablet brand too much with their premature release of Surface? I think it will take more than this kind of ad to make in-roads into the iPad market, but they really have nothing to lose at this point.

I think an even better example of an attack-from-behind ad is this Samsung Galaxy S III ad. This ad is more successful because their points are stronger and they’re not attacking the product feature by feature. Instead they’re attacking the Mac-head culture in an amusing way. They associate the iPhone with hipsters, idiots and old people (all probably true) and they make you not want to be associated with those demographics so (for at least a second) I considered switching. It probably says more than I care to admit, that the ad that attacks my vanity works better on me than the feature argument. Samsung is in a better position here because they have a great product and the iPhone has slipped from being the market innovator to being the slightly complacent, establishment.

Microsoft on Deck Again: The Bing It On challenge

Yet another successful attack-the-market-leader video is again from Microsoft: the Bing It On challenge. Once again, Microsoft has little to lose attacking Google on search engines and these ads, at least, get their name back into circulation in this product space. It’s probably telling that 2 of these 3 videos mentioned here come from Microsoft. There is very little offensive here as Microsoft attempt the Pepsi blind-taste-test style ad. What works in their favor is their choice of spokesperson in Jonah Ray: he has likability and geek-cred being a Nerdist bench warmer. Will it get anyone to stop Googling and start Binging? Unlikely, but it is a good way to remind us that Bing still exists – of course, you have to have a Microsoft budget to be able to plaster this ad everywhere to achieve this.

So, what can the Corporate Guerrilla Video producer learn from the big boys spending big money to make these come-from-behind ads? Just because you’re behind doesn’t mean you have nothing to lose. You have to be really careful getting the tone exactly right on these kind of ads – get it wrong and you end up looking more ridiculous, bitter, and out of touch than before you made the ad. You can’t look desperate, or too aggressive. People still love the underdog so play to this emotion. The tone has to be, the market is just plain wrong that we are not the leader here. This is also one instance when your video shouldn’t look cheaply produced: you don’t want the message to be we’re so far behind we can’t afford to spend any money on this. If you do get the tone and message right, there is a chance that you will get consumers to at least consider their buying choices. But really market-test these kind of ads before you release them into the wild.

2 thoughts on “Attacking from Behind”