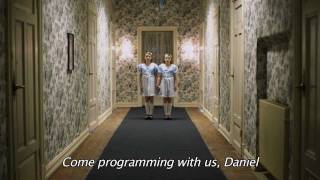 Recently, I said that I had never seen a decent corporate music video but, that I was happy to be proved wrong. My friend, Ultan, was happy to oblige by sending me this video from JavaZone:

I have to agree that this is probably the best corporate (if you can call an open source conference, ‘corporate’) music video I yet seen – certainly the funniest. But, a little digging unearths more video brilliance from JavaZone, most noteably this fantastic spoof of The Shining:

JavaZone, you just became my corporate video production heros! The attention to detail is brilliant: where did they even find a location with the right carpet.

So what can we learn from these, and the rest of JavaZone’s videos? To pull this kind of thing off you can’t be cheap. I don’t know their budget but these videos look expensive. The writing must be fantastic – it all goes back to the script. The scripts for all JavaZone’s videos are fully formed and would have been funny just to read, never mind to see. You have to go all in. You can tell that the participants had fun making these videos and there’s nothing cheesy about them.

JavaZone is as niche and techy as you can get and yet they made videos that would hold the attention of just about any viewer. That’s very hard to achieve, but they did it by choosing pop-culture icons that reach far outside their field and their naitive Norway. Most people have seen The Shining, have had a Bad Romance ear-worm, or have watched a disaster movie and so, combined with the really high production values, the videos have appeal far outside of their target field.

I’m sure the ROI for JavaZone is difficult to measure but, I know if I were a conference attendee, I would feel proud to be attending something that had the balls to create these videos. The next time your client asks you to create something funny, edgy and out of the box; something that could go viral show them JavaZone’s work and then see if they really have the stomach for it.

Ok, enough fawning but I’ll just leave you with one more: their appocolypse, disaster movie spoof. That little background shot of Stephen Hawking trying to pole vault is just genius:

One thought on “Inspired: JavaZone”