Inspired: The sights and sounds of Mexico City 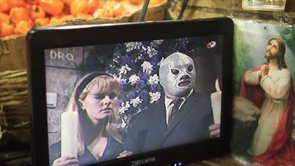 This short film was commissioned and broadcast as part of Channel 4’s Random Acts series.  Has three and a half minutes been packed with as many cuts outside of a MTV show? But it works as it gives you a great sense and feeling for Mexico City as a place without a word of dialog or wothout you having to leave your desk chair. It’s a great example of showing, not telling and of the editor’s craft. The speed of the cuts match the energy of the place perfectly, even if you do feel exhausted at the end of it.